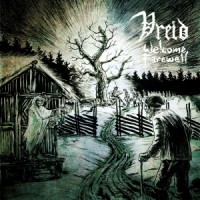 2014 is a special year. 20 years ago, the bands Windir and Ulcus were founded. Windir was the solo-project of Valfar, later the other members joined thim, and so ended Ulcus. When Valfar died the heirs decided not to go on with Windir and Vreid came to live. So all these bands have (more or less) the same founders and bandmembers. Time for some party, and how could there be celebrated better than a great tour through Europe?
Besides the tour, I got this release in front of me, and although the tour is announced well and with a lot of publicity, I had no idea what I had in front of me, but after a bit of searching, it seemed that this was the ‘Welcome Farewell’ album, which Vreid released in 2013. Although it’s not quite clear to me what this is supposed to be, it is without question that Vreid is a great band, and that reviewing this is not a hard task!
After a calm intro, the band unleashes ‘The Ramble’, a great start. Vreid was always well known for their melodic, even grooving black metal, and this can be heard immediately in the first song. Ideal for headbanging, the songs are pounding but keep hold of the grim black metalatmosphere which is so typical. Blastbeats and tremeloriffs, which are the main components in many black-metalsongs, don’t play a lead role for Vreid. The band has chosen for a grooving, almost swinging way of playing, without losing their brutality, or sounding less ‘black’.
‘Welcome Farewell’ was already released in 2013, but isn’t any less relevant nowadays. Certainly with the upcoming tour of Sognametal it’s good to listen to these songs again. For those who are fan of pounding, grooving blackmetal this one is certainly recommended!