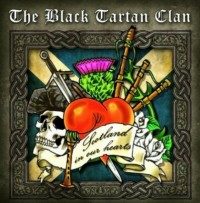 When you hear this title and band-name, of course you think of a group of rebelling Scots who overflow us with bagpipes until they’ve become independent. No, not this time, these men in black tartans come from Belgium. And for the bagpipe punks between us, this album is good news!

Piper Bill is the first song of this album and starts with simple punk, but the addition of banjos and a hell of a lot of bagpipes. Then we hear the raw whiskey voice of MacTouche.
No balls, no glory.
It’s the story of Piper Bill.
No balls, no glory.
The bagpiper with the iron will.
A great song for the fans of The Real Mckenzies, which is what the band reminds me most of.

The second song is the confusion Scotland in our Hearts. The Clan tells us here about the nation they fight for and they belong, not their own Belgium, but the raw Scotland.
The titletrack of the album is fast and catchy and with these bagpipes it rages on in your head for days. Though the CD is a bit less loud than the previous records like Standing Strong.
This will probably allow more people to listen to this band. Not just the punk fans.

We are the clan. The main part of the lyrics are written in French. This is as well the only French we here on the entire record. The rest is all in English.

Belgian and Drunk, I guess this is the clans true nature. A song about the fame and glory of Belgium and all the big chapters in the national history. No, not really, it sticks to everything these guys don’t remember because the amazing amount of alcohol they consumed.
The next song is a known one for all the folkfans, Ye Jacobites. I believe I’ve never heard this come so loud from my speakers. There are two reasons for that, the first is that it’s the loudest version I know, the second is that this is the best version I know, so sorry neighbours, I’m gonna raise the volume a bit.

Another song about Scottish culture is about the typical Scottish dish Haggis, which is a sheep stomach filled with pieces heart, lung, liver, suet and oatmeal. Unfortunately these men aren’t so lucky with their haggis, it’s filled with maggots. Never the less they’ve written a great and catchy song about it. Personally I think this is the best song on the CD.

The last song is a bit more sentimental. The artist, a nice and peaceful song with flutes and banjo. Something you can really enjoy.
Though the artist is dead, his music will live.
And that’s really all that he wanted to give.
And some day will come when they will forgive,
The way the artist has lived.

All together this is a great record for all folkpunk fans and bagpipe lovers. Definitely one I would recommend to everyone!