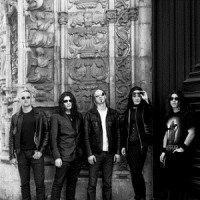 My Darling Horse seems to be an unusual title for an album made by Ukrainians residing in Portugal, but Yar seems to focus on a broad scene around the world. They describe the music as progressive folk-metal. This album consists of 7 songs, the most of them with a rather dark sound, which seems to be a bit ‘underground’.
It’s almost the if the frontman has a bit of a cold, I don’t think it’s a very pleasant voice. A kind of low growl. The rest of the music is rather nice, it’s not clear to me if the ‘underground’ sound in on purpose or due to bad recordings, but as a sound it’s rather nice.
In some tracks the Ukraine folk is fused with the metal, but there are tracks like Cossac on the Mountain which are typical folk-tracks in heavy coating.

The band has clearly some improvements to make. The recordings can be done in a nicer way, but their style is surely interesting. I’m curious about the albums to come from this band.