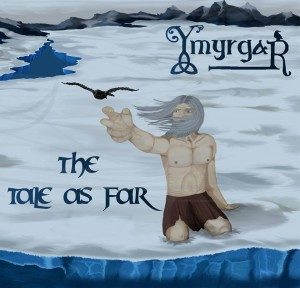 When I stumbled upon Ymyrgar almost two years ago, I was very pleasantly surprised by their demo’s. Although they weren’t of the best quality, their musical ideas were quite brilliant. They have a nice style in which they blend influences from bands like Eluveitie with Ensiferum and other more epic bands. This gives them a nice sound, with the Celtic influences on one and the power of the epic tales on the other hand.
This sound laid down from the very beginning of their first album ‘The Tale as Far’. Einu Sinni Var is an nice intro with very nice ideas. It’s a shame the implementation of these nice musical ideas is not the very best. The orchestrations are a bit childish.
Dawn of Time is one of the songs we had heard before from Ymyrgar. Just like Ode To mighty Deeds, a song in which the brilliancy of the band is made clear. A superb composition, but I wished to hear a very nice recording and mix of both songs, but that’s what I miss on this album. The recording and mix are far from excellent. And that’s a pity, the Ymyrgar needs a very good recording and mix, because of all the orchestrations and small choirs and stuff.
There are seven tracks on this album and they’re all fine ones, my compliments for the band for their composing skills.

This album gets a 7 rating, due to the nice songs and ideas. Normally I’m not to fond of albums with poor recordings or mixes, but I like the songs of Ymyrgar this much, I can stand this quality for a while. I hope this band meets a label and producer which gives them the ability to use their skills to the max the next time.