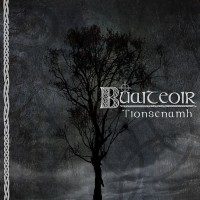 Buaiteoir (my translation is Gaelic for “Winner” or “Champion”) is a new Folk Metal project from Brazil who have just released their first EP entitled Tionscnamh (which I am translating as “Beginning”) There are definitely some promising things happening here.
Multi-instrumentalist and vocalist João Andrade wears many hats here going between vocals and playing bass, whistle, bandolim, bodhrán and hurdy gurdy. The closest thing this reminds me of is a stripped down Eluveitie or maybe some of Korpiklaani’s folkier/less metal songs or even some Nordland-era Bathory. There is a little something for everyone here with songs that tend to be strictly traditional instrumentation wise (Buaiteoir’s song (Instrumental) and others that have lead guitar/bass and are more metal (Suaimhneas Siorai (R.I.P.) than folk. Guilherme Silva adds lead guitar here (most notably on “January 30th, 2014”) while Tisom provides programming, rhythm guitar and fiddle. I think Buaiteoir/Joáo are still in process of discovering who they are and where they want this project to go, whether to go heavier or folkier-a tough crossroads but a possibility to do both without sacrificing the other. Maybe having some more permanent members will allow for more focus and create a better cohesion with future releases.
Calling this release Tionscnamh (again assuming my translation is correct of “Beginning”) really is just what this is-a beginning and hopefully towards a brighter future with newer tracks down the road they are forging.