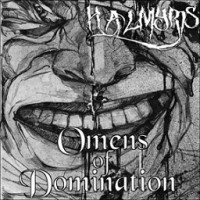 The debut-EP of the Romanian Death/Folk-metalband Halmyris consists of four tracks and is available through their bandcamp.
Their music consists of catchy and somewhat epic guitars, backed-up by nice solid drums.
The standard guitar-riffs are a nice treat and the guitars are a good couple which complement or interact with each other, just what’s needed in the track.
The deep dark growls of their vocalist are decent, but they are a bit boring after a few tracks. A bit more diversity in the vocals should do the music much good. It seems to be hard for starting bands to keep the keys in an submissive role. Halmyris is no exception, the keys are almost everywhere too loud and that’s too bad. Because of the lack of variation in the vocals and the overall quite dominant keys the music seems to sound quite the same everywhere. And this doesn’t do justice to Halmyris, because the drums and guitars do quite nice a lot of different Deathmetal-gimmicks.

Halmyris made a nice début with ‘Omens of Domination’, it’s obvious the guys are quite young and have to grow into their music and carve deeper into the death-metal, to create a sound which not only draws you attention, but keeps it there where you want it, with your ear in the speaker, wanting to hear more and more. For the fans of bands like Kalmah, Halmyris could be a nice upcoming band in this genre.