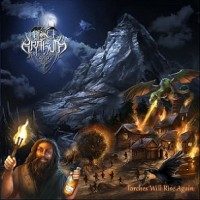 I first became acquainted with Drakum about a month ago while doing a podcast and we played “Around The Oak” from the EP of the same name from 2011. I found it to be instantly catchy and heavy. This 8 piece from Spain have now returned with their first full length with some new members since the original EP. The album features 10 songs, including the 3 original EP songs. They play Folk Metal the way that I like it…..not over the top with Folk but obviously present and still Metal. With this much instrumentation you will obviously have to make sure everyone has a place in the mix and they certainly have achieved that here. Nothing gets overwhelmed by another instrument or vocals so a great sounding album. As a point of reference, they remind me a lot of Winterhymn (US) with maybe a dash of Skiltron (Argentina) and their fellow countrymen Celtibeerian. The album opens with an obligatory instrumental (It’s OK…. everyone seems to do this now) right into “Around The Oak” which will prepare you for what is to come, relatively straightforward metal songs layered with whistle, pipes, keys, violin and growling vocals. “Whisky” is real burner of a song, equal parts anthem and shredding. This album will give you an instant dose of Folk Metal with every song (“Song For Your Death” is just over 5 minutes and the longest song on album) so they pack a lot into every track. I wish there was a little more diversity in song style here though since they tend to start losing some individuality. “Embers of Tomorrow” was a welcome change of pace with lush keys, violin and female vocals and then into the closing title track which signals a blistering close to the album. Overall, a valiant effort and a fun album to listen to. I look forward to hearing more from them in the future.