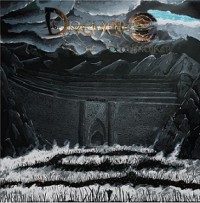 From LARP friend to a folk-metalband, all with the guidance of British author David Gemmell, that characterizes the French band Drenaï.
The fact this band is inspired by an author can be noticed when you’re listening to this album.
This album is a complete story, starting with the intro Once Upon a Man, followed by the strong metal track Edge of the World. The guitar is nice strong and clean, where the vocals are harsh and grim, this is orchestrated by the keys and has this nice high flute woven into the whole song.
To build a great story it’s time to slow down a bit, Drenaï does this in the first half of Sieben in a nice acoustic way with clean singing, but in the second half of the song they return to the nice sound like we knew it from the previous song.
In the dragging song Rowena they mix the harsh raw male vocals with a lovely female voice, this enhances the ‘story-feel’ of this album ‘Deathwalker’.
And so the story continues, interluded by orchestrations, and choirs, which keeps you listening to this nice story.

If you use to listen to songs in a random order, this album is half as exciting. You’ll probably think Drenaï is nice, but not extremely interesting when you listen to an individual song. But when you take your time and you listen to the whole album, then you will be excited. They’ve build a strong story which keeps your attention from the beginning throughout the whole story to the very end.
When you like concept albums and epic stories, this is something you’ll definitely want to listen to.