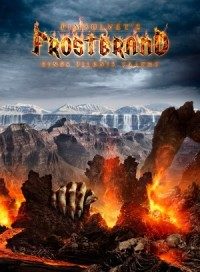 If you haven’t heard them before you may be in for a bit of a surprise as they lean closer to Pagan or Black Metal or even some Power/Thrash than maybe Viking Metal given their name/appearance. I can honestly say I can’t think of another band that has as unique a sound as they do.
There is more melody here than you may hear upon an initial listening so you may have to give it 2 or 3 plays to hear all of the subtleties. Vocalist/Guitarist Stephan alternates between a growl and tenor vocals which give a nice variation to the feel of the album especially on songs like “Uralt” and “Hexenwerk”. I think what holds this album back is the mix, where the vocals are too much in the front and overwhelm the instrumentation in some instances (“Wüste Wahnsinn” and “Fesseln der Asche” come to mind) The rhythm section of Andreas on drums and Steffen on bass are extremely talented and get buried in the very midrange mix so that is why you may need to give it a couple of listens to hear everything that is going on. Guitarist Christian shines during his solos and luckily cuts right thru everything else. Ultimately Fimbulvet have a one-of-a-kind sound that makes them instantly recognizable from the numerous bands out there but I believe they need to consider some different recording options for future music. I watched some of their live videos on YouTube and you can really hear how different they sound compared to the album-much more powerful and engaging. Given the right producer/studio/mix they could achieve much higher recognition than they currently have.