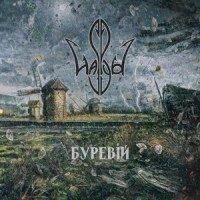 Another Ukraine band has surfaced. Haspyd existing since 2008, it took them until 2013 to release a first EP. After this they were soon picked up with by Sound Age Productions, where they released an full length recently.
Situation like in the Ukraine, inspire people to write and express themselves.
And while travelling across borders has become more difficult, there are places to be filled in by other bands.
Music-wise you shouldn’t expect new things from Haspyd. They’re not the band which shall travel around the world with a whole new concept of Pagan Folk-metal, but this doesn’t mean they’re not nice. A lot of these kind of bands isn’t touring around the world, only a few can do that.
The band fits their pagan themes, with solid guitars and a clean dark Slavic voice. And with some flutes here and there they create a solid folk-metal sound.
And they underline their connection with the Varangians (the old local name of the Vikings) with the song The Pursuit of the Varangians. One of the very best Amon Amarth songs, so I can imagine their audience likes to hear this.

Haspyd hasn’t made a very special album with ‘Bureviy’, but it is a very decent one. As things are nowadays, there will surely be an audience for them. The people who see Haspyd live at a concert, surely like to have something they can listen to at home. The fans of Haspyd will be satisfied for a while with this album.