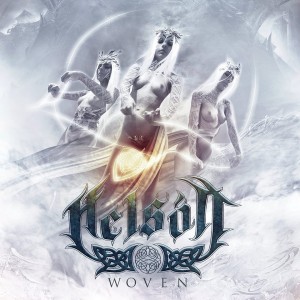 You may see “Pagan Metal” listed next to a description of Helsott’s style and if you are not into Pagan Metal you may decide not to listen. You would be doing yourself a great disservice to say the least. Is it Pagan Metal? Yes, but so much more so I find the genre tag very limited in this case.
After opening on last year’s Paganfest tour and only getting to see one song (thanks to traffic) I was limited to listening to Helsott on the Folkvangr EP and watching YouTube videos. I highly anticipated the release of Woven and it does not disappoint and, in fact, it exceeds all of my expectations. From the opening of the song “Helsott” it is readily apparent that the notorious low-fi recording choices that plague a number of Pagan Metal bands do not arise, being one of the best recorded albums of the year thanks to mixing by Roy Z. (Bruce Dickinson, Halford) and mastering by Andy Horn. Plus it doesn’t hurt that Helsott just write great songs, period. Mark Dow and David Walston on the twin guitar attack really complement each other on every song with great riffing and soloing while Cooper Dustman on drums and Mikey “Mjolnir” Muller on bass create a crushing solid foundation. Vocally Eric Dow switches between a low death growl and a commanding death shriek which even further augments the texture and personality of the songs. Finally the contributions of Steph Robinson on keyboards and additional vocals cannot be overlooked, playing a pivotal role in numerous tracks such as the 12 minute epic “The Sacking of Lindisfarne” and the beautiful keys and vocals to open “Now His Fate”. To even further improve the offering of 8 new songs, they have also remixed and remastered 3 songs from the Folkvangr EP ( “Folkvangr”, “Vandals Divide” and “Honour Thy Valkyrie”) and included them here. Even though these songs are a few years old, they do not seem dated and cohesively work here.

The future of folk, pagan and Viking metal in the US is in good hands with Helsott at the helm!! One of my favorite albums of the year!!!