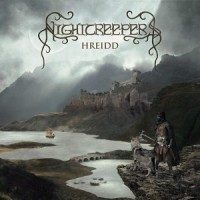 The third full length album of the French NightCreepers is finished and the world may finally listen to Hreidd. After Alpha made a pretty good impression on me in 2012, I’m very curious about this new release.

As you may expect after the last two albums, it all starts with a epic entrance, Guildsmark it’s called this time. The passage to the next song is not always the most fitting one, but this time I really don’t get it at all. From this epic intro to a clean guitar with some keyboard sounds. Nonetheless the album kicked off now with Death to the Hypocrite and I immediately get the feeling I had with the previous records. Up tempo aggressive folk-metal with raw grunts, unintelligible clean vocals and jolly tunes. But it’s a pretty good song and it promises a lot for the rest to come.
After another of these fast songs named One path Masquerade it’s time for a NightCreepers style acoustic intermezzo simular to Enter the Lair and The Nexus from the last record. Later on the album are a couple more of these tunes. Personally I find it a rather pleasant change from all the raw metal that’s offered you the rest of the album. Abon’s Race is another of these merry metal songs, soaked with celtic tunes, just a violent version of them.
True lads have Fallen, a song with possibly the most famous grunter from France. Rachel Aspe, the young lady whose video went viral in the metal world after participating in France Got Talent Show on TV.
The Hreidd’s Path, everyone is free to judge, but I think it sounds a lot like Waldschrein by Equilibrium. Further on in the song this was settled a bit and we clearly hear NightCreepers again. I checked the site of these French because they used to have a keyboard and a accordion, who I thought had left. This is true, but I still hear some accordion every now and then.
Than it’s up to Vanghor the Bastard, which reminds me of Suidakra’s Rise of Taliesin. Something that’s definitely positive in some way. Though it seems to be hard to stay original for many bands in the genre, no different for the NightCreepers. It all sounds pretty good, but it’s nothing you’ve never heard before.
Than the last song of this album, since I know this band for some years I think it’s really awesome what they’ve given us. A new version of the titlesong of their last album, Alpha.
Sacred head, bound to the rest of the pack,
Hairy threat, oldest menace of mankind,
Comrades of Duty!
Creepers of midnight when Dusk has fallen,
Allow us to praise him,
When everything’ll remain silent
And everyone will look at the ALPHA!