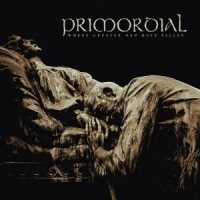 Equal parts hypnotizing, dismal and uplifting, Primordial have once again released an incredible album with Where Greater Men Have Fallen. I would be hard pressed to think of another artist in any genre that really makes me ponder existence like Primordial does. To be able to create such grim anthems is minimally a herculean task and they are masters of it.
Every song paints a sonic landscape where you are transported to a different place and time, each more intriguing than the next. In one minute I want to climb the highest mountain and scream and the next I want to openly weep into my own hands. The riff to the title track opening the album is back breaking and merciless as it meets with the main body of the song. AA Nemtheanga then utters his decree with the power and conviction that only he can, the best vocals I believe he has ever done. The gloomy openings to “Babel’s Tower” and “Come The Flood” set up Nemtheanga again to tell epic tales of pending destruction. Musically the album is not loaded with nonsense, with each track being a thoughtful progression to its untimely end. I started thinking more of these like “discussions” rather than “songs” since they are so thought provoking and deeper than most “songs” are. With an average time per song of just over 7 minutes you will get lost in the tapestry sewn here, but not to the point of fatigue but to the brink of oblivion. Ciáran MacUilliam and Micháel Ó Floinn collective guitar work is precise and warm, not stiff or pretentious but inviting and thoughtful. Pól MacAmhlaigh’s bass work and Simon O’Laoghaire’s percussion choices augment the backbone of every song without having to resort to cheap musical acrobatics to gain attention. “The Seed Of Tyrants”, “Ghosts Of The Charnel House” and “The Alchemist’s Head” will leave you gasping for air and wanting more at the same time, all crushing and consuming. Production wise the album is where it needs to be, everything is clear but not antiseptically so, retaining a sombre mood to it with smooth tones. “Born To Night” brings you back to a dark place that only Primordial resides, lyrically my favourite of the album. The death march opening of album closer “Wield The Lightning To Split” signals the end and a call to try to come back to reality which is no easy feat after the song ends.

After reading this review you may say it is over the top or exaggerated but don’t take my word for it. Listen to it and you will come to the same conclusion I have……Primordial are akin to something like Stonehenge…….we will never really understand it so just accept it for what it is, timeless, ancient and beyond our limited scope of what we know to be real……..