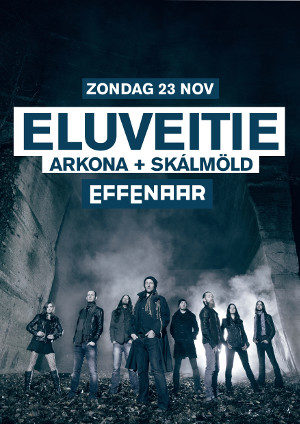 It is sunday evening, seven o’clock. A large delegation from Folk-metal.nl travels to the Effenaar in Eindhoven, where a healthy dose of folk metal will blast through the speakers tonight. The Swiss band Eluveitie is being assisted by the Russian band Arkona and the Icelandic band Skálmöld for their European headliner tour. After all three of these bands have been reviewed earlier this year, the moment has finally come for us to admire these bands live on stage.

Skálmöld
The Icelandic band Skálmöld has the honor of being the first act of the evening. Since the Heidenfest tour in 2011 it has been a while since the band has performed live in the Netherlands, but when you are the opening act for two well-renowned folk metal bands there’s even more pressure to perform, but they nailed it! Starting from the very first note, the musical whole is infallible, and all of the instruments are perfectly harmonized. The band rushes over the enthusiastic audience as if they have never been gone, and people are fanatically dancing and moshing all across the room. In addition to a wide range of songs from the new album Með Vættum, a lot of songs from the earlier work of Börn Loka and Baldur also pass by, which makes for a varied setlist. Besides the great musical whole, the credits mainly go to the versatility in the vocals of all the band members. As is the case with Skálmöld, each individual band member contributes to the vocals, and both the grunts as the clean vocals and screams are of a level far above average. This is exactly what makes Skálmöld so special, and distinguishes the band from so many other bands within the genre. Besides a broken guitar string, the gig is close to being perfect, but these trifles are irrelevant at this point. What a wonderful way to start of the evening. The rest of the bands can pack up and go home, because my evening couldn’t get any better than this.
Score: 9,5

Arkona
Arkona is one of the acts that you can continue to see live without the band ever getting boring, because these Russians are always a guarantee for a party! With the release of Yav earlier this year, a lot of variation was created in the setlist, causing various influences such as black metal and pagan metal to be interspersed with polka influences. To be honest, Arkona has never disappointed, up until now. The band somehow seemed to be a lot less enthusiastic tonight, and this was especially evident when looking at vocalist Masha. As fanatical as she usually rushes across the stage, she seemed very ‘tame’ tonight. In addition, it seemed as if she couldn’t keep her breath in a large number of songs, causing the lyrics to be rushed or left out altogether. This might also explain why a lot of songs with clean vocals have been added to the set, which are interspersed with some of Masha’s screams every here and there. The band seemed to recover somewhere halfway down the set, and by the end of the set, songs like Stenka na Stenku and Yarilo turned the room into one big, pounding and moshing crowd. Of course you are being forgiven as a band when you’re having an off-day, you can’t always perform perfectly. But when I look back to previous live performances of the band, I can honestly say that this was one of the poorest shows I have ever seen from the band, too bad!
Score: 7,0

Eluveitie
The Swiss band Eluveitie is the headliner for this evening with the tour for the release of their album Origins. With mixed feelings I was standing among the audience, after all, the last three shows I’ve seen of the band were very moderate and below average for Eluveitie standards. However, the band has surprised me tonight with a very diverse and versatile show. One thing that immediately becomes apparant is that hurdy gurdy player and vocalist Anna Murphy has an increasing place in the spotlights. In addition to the wonderful rough grunts from frontman Chrigel Glanzmann, the focus is shifted more and more towards the slightly quieter songs in which Anna’s distinctive voice stands out quite nicely. Although the new album Origins doesn’t really appeal to me personally, the songs from the last album were finely interspersed with some older work. Unfortunately not in terms of Spirits or Slania ‘old’, but enough songs were played from the last couple of albums. Piece by piece, the songs are being performed very convincingly, and the band proves time and again that they are well capable of living up to the expectations of the audience live. In addition, a lot of credit goes to Matteo Sisti from the band Krampus, who fills the spot of piper Päde as a substitute. Deep respect for this man, who has rehearsed an entire Eluveitie set in a relatively short time! Although the songs are all performed evenly beautiful, it sounds like much of the same to me. Personally, I find it unnecessary to add a song like Call of the Mountains to a set that already has the quite similar song A Rose for Epona. The Swiss-German version this time, mind you. But personal opinion cast aside, this was once again a very strong performance from the band, and even though I like the older work from the band a lot better, i’ve had a perfectly good time!
Score: 8,5