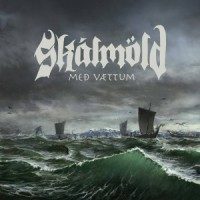 The fans of real Viking metal were probably aware of the fact that the Icelandic band Skálmöld will release a new album this year. These men, who shook the world of folk metal with the release of their debut album ‘Baldur’ will release their third studio album by the end of this year. Just like its predecessors ‘Baldur’ and ‘Börn Loka’, the new album seems to be a concept album, although the different tracks feel like individual songs. As the album title ‘Með Vættum’ (among Vættir) suggests, the focus of the album theme lies on seasons, spirits of nature and other mythological creatures from ancient Norse mythology. Typically Skálmöld? Yes and no. Með Vættum is similar to the earlier work of the band, but is slightly different.

The album starts with a solid opener that sets the tone for the rest of the album. ‘Að Vori’ rushes over you with a fierce pace, and builds on the work that the band has released earlier with Börn Loka. The grunts of vocalist Björgvin Sigurðsson are perfectly harmonized by the ‘choir’ of the other band members, which makes for a nice contrast that manages to keep the music interesting. ‘Með Fuglum’ seems to start off with some black metal influences, but quickly falls back into the familiar Skálmöld rhythm. A fierce dose of solid guitars, thumping bass, heavy drums and a hint of keyboard and oboe is what follows. What makes Með Vættum slightly different than its predecessors is the large amount of tempo changes and influences from genres ranging from death to black metal. In addition, the whole thing sounds a lot more mature and elaborate than Baldur, something that was also clearly audible on Börn Loka. The album mainly seems to lean on the long instrumental passages that work towards a climax before being complemented by the vocals. Because of this, the album seems to offer much of the same, but then again, this is something that I have come to love from Skálmöld. With more than 9 minutes of playtime, ‘Með Jötnum’ is the longest track of the album, but it applies the aforementioned trick well. After more than two minutes the vocals seem to fade, and the focus is put on the instruments that tend to work towards the end of the song. Halfway through the song every instrument except for the drums fall silent, and the joint clean vocals work towards the climax of the song, simply brilliant! However, where Baldur had ‘Kvaðning’ and Börn Loka featured ‘Hel’ as an outlier, the new album seems to have no real highlight. Með Jötnum has this potential, but doesn’t compare to the aforementioned tracks in my opinion. However, the new album offers enough versatility to not really notice this.

By definition, I wouldn’t call Með Vættum better or worse than its predecessors, the album is different, but in a good way. The individual tracks are versatile and varied, and the large amount of tempo changes and variation between clean vocals and grunts ensure that the album stays interesting and is easy on the ears. However, the feeling that the band wants to express with their music is once again fully present. Með Vættum is another wonderful and diverse album that puts a nice stamp on the bands’ current repertoire. Now let’s see how this band will perform live by the end of the week, I am very curious!!