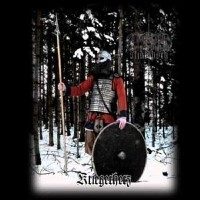 If any of you know about Germany’s Skjaldborg, you may say “Why are you reviewing an album that has been out for over a year now?” Unfortunately, more of you are probably asking “Who is Skjaldborg?” It is understandable that you may not know who they are for a number of reasons, independently released, studio project only, no live shows, etc….and that is why it is time for someone to trumpet the war horn for Skjaldborg and I am lucky to be the one to do so. To put it in perspective, I listen to this more than some of the other “Viking metal” releases from last year numerous times over including Amon Amarth, Månegarm and Grimner just to name a few…..not that any of those albums are bad, far from it in fact, all being quality releases from last year. There is something about this album though that I keep going back to again and again. I have tried to think of one word that makes me wonder why I keep listening to it and the one word I keep going back to is “authenticity”.
There is something to be said about that…. it is not like Skjaldborg is looking for the crown of Viking metal and to have a yearlong headlining tour. Frankly, they would probably be content to just record it and listen to it themselves but thankfully it is available for everyone to listen to and enjoy. From the opening of “Hornstoß” with its immense pounding drums sounding the call to battle, you will be transported right into the middle of the fray and the first strike against your shield will be the transition into “Todgeweiht”. The bass line to open “Schildwall” will find you fending off your attackers while then cleaving them in half and gaining the high ground. “Kriegerherz” will give you a moment to catch your breath before you charge back in, galloping double bass drums setting the pace. “Blutritt” will see you mount your steed and now attack with renewed vigor, turning the tide from what may have been certain defeat into a triumphant victory with “Krone der Schöpfung”. “Zerfall” calls that we not only defeat our foe, but utterly destroy them. Now, I know that these are not the “meaning” of these songs but to me that is what this is…..a 30 minute long soundtrack you could turn down the volume on your TV while watching the battle sequence in your favorite fantasy/historical movie and listen to this instead.

One of my favorite albums of 2013, I wish I had discovered it last year so I could have listened to it a couple of hundred more times before writing this review……