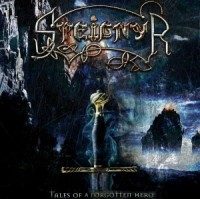 After their EP ‘The Legend’ earlier this year, the Spanish Celtic Folk Metal band Steignyr releasing a full length album ‘Tales of a Forgotten Hero’ now.
We had some marginalia with their EP, but there were some very nice things on it as well.
On the album are a few songs of the EP so it seems, but starting with ‘The Rise of a Legend’, you get a Déjà vu experience at once. This turns our to be the same track as Wrath of the Gods of their previous EP.
Then we move on to Dragon’s Tales, the title has gained an s, but what’s more important, the female vocals are spot on this time. Not the overdone stuff in the previous version, but nice clean and clear songs. Hyrtharia has a nice voice, and she doesn’t need to ‘overdo’ things, using the benefits of her fine voice is simply enough.
With the beautiful instrumental Oak of Wisdom and the somewhat Gothic-influenced track Wind of Revenge the album begins to feel really nice. Steignyr knows what the keys can do for a good song.
But there is more to this ‘unspanish’ sounding band, they added some epicness to their brew as well as we can hear in songs like The Rage of the King and Tales of a Forgotten Hero.
The previous songs are so strong they bleach the track Steignyr a bit. This was the absolute peak of their EP, but they have proven they can write more of these beautiful tracks and even better.
To confirm this statement they have put Sword of Victory on this album, a slower, but still very powerful songs which mingles the power of metal, the epic sound of the keys, and the fragile sounds of old folk-music.
Just like their previous piece of work ‘Tales of a Forgotten Hero’ ends with an instrumental track.

We shouldn’t forget about the heroes of Steignyr. They have obviously learned of their previous recording-experience and have made an album which is much nicer to listen to. They solved their problem with the female vocals and there are also less overdone keys.
They prove they can write very nice songs and they’re definitely something you should try.