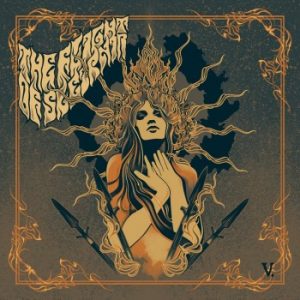 To try to categorize The Flight Of Sleipnir is not an easy task. I am sure if you asked 5 different people who listened to their newest release “V” you would probably get 5 different genre tags….doom, stoner, folk, viking, even black metal and they would all be right.
TFOS sit in the epicenter of all of them with a tinge of current heavy progressive acts like Mastodon and a nod to Agalloch which I think would be the closest other like band comparison but still not really close. The songs swing back and forth between subdued acoustic instrumentation and soft distant vocals and bombastic guitars and gut wrenching wailing vocals. Previous efforts were independently released with the last two full lengths (Essence of Nine and Saga) released via Eyes Like Snow before being signed to Napalm Records last year. The new album has a smoother overall sound without pulling the gnashing teeth from the heavier parts of the songs. Clayton Cushman (Guitar, Vocals, Bass, Keyboards) and David Csicsely (Drums, Vocals, Guitars) set a slow burn to the tracks here and then let them fully engulf everything around them. Opening tracks “Headwinds” and “Sidereal Course” give you a taste of this from the start with a melancholic opening and transition to a controlled chaotic conclusion. “The Casting” gets right to the point and pummels you for almost 7 minutes before next tracks “Nothing Stands Obscured” and “Gullveig” return to the introspective openings before the raging begins anew template. “Archaic Rites” is probably the most diverse track here with the addition of female vocals and pan flute before returning to the homeland of the last track. “Beacon of Black Horizon” is a 12 minute soul crusher which will discard your useless carcass to the vultures circling overhead especially with the inclusion of a choral of damnation towards the end of the song. When listening is complete you will wonder what you just heard. Good luck trying to categorize it. Let’s just say it sounds like The Flight Of Sleipnir.

The Flight of Sleipnir