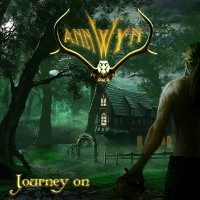 Annwyn are an up and coming folk metal band from the Netherlands and have just released their first EP with Journey On. Formed in 2013, they have already gone thru a few personnel changes in their short history and hopefully have now solidified their lineup going forward.
They also won a “Battle of the Bands contest” last year, so based on that they have persevered to finally get some recorded songs out to us to hear. If we could all jump in the time machine to hear the early recordings of Korpiklaani, I am sure those first tracks would be on par with what we are hearing from Annwyn. There are only 3 songs here so not a lot to go on to get a detailed picture but enough to give a quick snapshot of where they are headed. The song “Journey On” starts off with some heavy guitar and flute and is a catchy song reminding me a lot of an Alestorm track on some level, especially because singer Bjôrn’s vocal delivery is very similar to Christopher Bowes to me. “Att Attackera” is also a very sound alike song to a simpler Korpiklaani/Alestorm track. The last track “Loki” is also reminiscent of a Korpiklaani track, again simpler in song structure and overall composition. At only 12 minutes long, it is still way too early in the process to see where Annwyn is eventually going to land. Looking at the band bio quick, it appears the average age of the band members is 20, so there is plenty of time for them to grow more and discover who they want to be musically going forward. Hopefully, they keep on the path and create a more unique sound of their own on future releases. I believe that they have the capability of doing just that…..carry on, Annwyn!!!