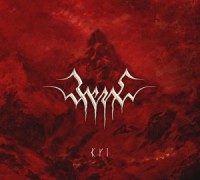 It has been a long 4 years since Brezno released the “Viharnik” EP which featured 4 songs of epic folk metal. I enjoyed the EP but I thought the songs were OK and sounded a little forced with production that lacked an identity and seemed disconnected in some way.
It is obvious that they have been busy which shows here in their first full length Kri, an improvement in every way from songwriting to production. This 6 piece from Slovenia have really grown into themselves with this release. If I were to compare them to anyone, the obvious ones would be Eluveitie and Arkona with some german thrash and symphonic metal mixed in with maybe some Valfreya from Canada.
The obligatory opening instrumental “Kjer so padli veliki” (“Where Great Ones Have Fallen”) leads into “XI. Bitka” (“11th Battle”), which really gives you the highlights of Brezno in one song: thrashy riffs, aggressive bass, traditional layered instrumentation with vocals ranging from beautiful solo female, tenor male, outright guttural and background choirs. Production definitely has improved and thankfully they re-recorded 3 of the 4 songs from the original EP and that is where you can hear the progression the most….the songs now are tighter and more up tempo then the original versions.
Listening to the reworked “Žanjica” (“Morana”) really shows how far they have come with a little time and much needed production help. Personally, I would have eliminated 1 or 2 of the instrumentals here (there are 4 including the intro) and stripped the album to just the regular songs….not they aren’t good but not really necessary. Brezno have really put together a nicely crafted album here, with songs that have individuality and personality. After listening to the EP again, I could tell that the ideas were there from the beginning. It was just a matter of getting them to translate on the recording level which they have succeeded in doing here.

They really have found a harmonious relationship between the heaviness of metal and their Slovenian traditional/folk music roots. I expect to hear big things from them in the future if they stick to the magic formula they have found here on Kri.