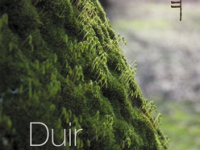 Duir have issued their first EP with a total of 6 songs called Tribe. This Italian 6 piece play a blend of straightforward folk metal with a heavy leaning towards Celtic influenced tracks with bagpipe being a featured instrument here.
The obvious comparison would be to associate them with bands that feature the pipes like Skiltron and Ragnaröek but I think they have a little Ensiferum in them somewhere since they are also very guitar riff driven as well. When you have this many instruments playing at one time you need to have a proper mix and that is what ultimately really hurts this release. The songs are there but the keys and bagpipes overwhelm all other instrumentation, making guitar, bass, drums and vocals fight for space. I think it also suffers from an overuse of compression giving it a very garage band like sound which they definitely are not. Tracks like “Magic Drink” and “The Child” are catchy and have the song structure and musicianship of a band with a definitive direction and style. “Dies Alliensis” is a real headbanger of a number and probably my favorite track since they dip their toes into some history waters, lyrically speaking.
Just to make sure I wasn’t too far off base here, I went to YouTube and found some live videos which captured much more powerful examples of what they really should sound like on a recording. I can only assume they have done everything on their own as far as recording, mixing and mastering of this EP which is highly admirable. Hopefully in the future they will have the funding available to re-record these songs along with newer ones and really make them shine much brighter than they do now. I am certainly reminded of my recent review of the new Brezno album in hopes that Duir follow the same trajectory….with a little time, newer songs, a proper recording and mix they could really make an impressive full length debut album.