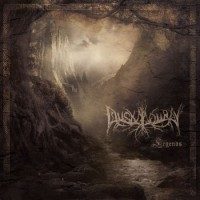 From the dark reaches of Pennsylvania and New Jersey USA emerge the mighty Duskmourn with their debut album. Previously, they had released a terrific 3 song self-titled EP in 2012 which reminded me of a mix of a few different North American bands: Amiensus, Appalachian Winter, Panopticon and maybe even some Woods of Ypres…..
I would maybe almost categorize their sound as melodic death. Originally existing as a 4 piece on the EP, Duskmourn is comprised now of only 2 members….Walter Deyo (Guitar, Bass, Vocals) and Bill Sharpe (Guitar, Drums, Keys). This has served to hone the sharpened edge of the Duskmourn sound and become a more refined entity with songs that are now as glorious as they are grim. Upon that original foundation of the previously mentioned bands I now would add Summoning, Emyn Muil, Saor/Askival (!!!) and Urkraft-era Thyrfing as potential musical brethren.
I sense a Tolkien inspiration while listening but not overtly so to be labelled as such. There is so much more going on than in the original EP, it is hard to believe that the old “less-is-more” adage is actually proven here. Taking the original musical direction from the EP, they have travelled deep into the forest, climbed black, snow covered mountains and come back with an epic collection of songs.
They have added traditional instrumentation and choir vocals here along with forlorn keyboards to create more layers to delve into but still have a very strong metal structure. Songs like “Through Ice And Snow”, “Awakening” and “Forged By Fire And Stone” will take you on a journey rich with fantasy and nature images as well as memories of a more honorable time. A growing trend seems to be too many instrumentals on albums of late…..4 here including the intro. I love instrumentals/ambient/soundtracks but I would have loved to hear what lyrics/vocals on tracks like “Woods Of Eternity” or “Dusk Over Fields Of Ruin” would have become.
Music of this style requires a good mix and production to succeed and this certainly achieves a proper blend, nothing overwhelmed by something else and spotlighted instruments or vocals when needed.
It may be a while for a follow up to “Old Mornings Dawn” or “Aura”, don’t fear since you now have “Legends” to listen to instead. Now is the time to climb over the mountains, get lost in the woods and stare into the campfire and become mesmerized while listening to this….. You may not want to come back…..