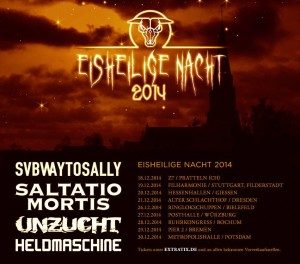 When you’re walking throught the cold winterevening, snow cracking under your shoes, starlight shining on your face. Then you’re perfectly in the mood for a ‘Eisheilige Nacht’.
Subway to Sally has once again prepared a warm winter tour for us and for the fourth time in a row they have chosen the Ruhrcongress in Bochum as a temporary home. The wise men aren’t coming only from the east to this event, no they’re coming from everywhere tonight. Thousands are gathering here this beautiful evening to enjoy this winterwarm treat.

Unzucht and Heldmachine
The opener of this evening was Unzucht, followed by Heldmachine. Both bands completely uninteresting for the folk and medieval fans.

Saltatio Mortis
But then the evening could really start. The German Medieval rockers of Saltatio Mortis entered the stage. Their show was lively as ever. Alea can get the whole audience going. And when the rest of the bands hits the roof with their bagpipes and stuff, nothing can go wrong. They played their great hits like Promoteus. Surprisingly we get a kind of acoustic quiet version of Spielmannsschwur.
And a lot of protestsongs like Wachstum über Alles and two songs of their new album: another protest against the ‘Christmastime’ which starts in August already, when you’re just coming out of the pool. And one about the lack of Clowns in the news everyday.
And with another reference to the ‘other holy event’ these days, they played Satans Fall, a song about the first angel falling down to earth.
Like we’re used to, another killer show by Saltatio Mortis.

Subway to Sally
The host of this annual show Subway to Sally, was the final act as usual. They played a very dark set, with a lot of songs of their lates album ‘Mitgift’, a very dark album with the subtitle ‘Mördergeschichte’ (Murderstories). This album contains all kinds of stories abouth death and the show is very dark, fitting this subject. And it doesn’t matter if the play the very powerfull heavy thriving songs like Grausame Schwester or they keep it very small like Im Weidengarten, everything sounds more than OK. Despite the fact I like the Medieval elementes in their music more, these new songs sounds very nice as well and are very suitable to be played live. But of course songs like Feuerland and Kleid aus Rosen are played as well. The last one always guarantee some shivers down your spine.
After they have played for more than an hour Lasterbalk, Alea and Herr Mümmenstein of Saltatio Mortis enter the stage, they play a StS song together, which is very nice. They obviously have studied on this and don’t simply play together, but have reworked the songs a bit, to make them suitable for this ‘larger band’. The rest of SaMo joins them on the stage and this very large band plays Saltatio’s Spielmannsschwur again, this time in the ‘louder’ version, Awesome. Among quite a number of songs together is Subway’s Veitstanz as well and they’re making this evening an unforgettable experience.