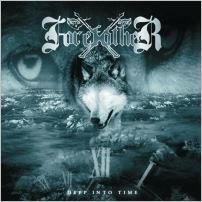 I always am a little skeptical of words like “re-issued” or “re-mastered” when an album that was released previously is put out again. Imagine now seeing another re-issue of an album that originally was released in 1999, re-issued in 2002 and now again in 2014. Thankfully it is Forefather so I am willing to give it the chance they deserve.
They have been playing high quality Viking/pagan metal for 15 years so for those of you who missed the boat the first or second time on this release, the third time is the charm for you!! If anything, you will get to hear their original more stripped down sound, verging on black metal if it weren’t for more accessible vocal harmonies and easier to understand lyrics. There is one extra track from the original release added here… “A Hearth Companion’s Pride” which was recorded in 2005 which when listened to other songs you will definitely hear a progression in the songwriting, vocals and overall production. One thing is for sure….Forefather really never sound dated. If I hadn’t known about them, I wouldn’t have been surprised if you said this was a brand new release from an up and coming band. Songs like “Visions Of Elders” “Ancient Voice” and “Immortal Wisdom” are better than most stuff you will hear nowadays. Wulfstan and Athelstan (the members of Forefather from day one) really have a tight connection with the songs and a definitive direction regardless of when the album was released. They also do have an instantly recognizable sound. If you are unfamiliar with them, my closest comparison would be they are England’s answer to Norway’s Immortal but not exact, and with a more historical slant on lyrics and with a little more of a folkier influence. Is this a “must-have“ release? Chances are you probably own it in one fashion or another already. If not, then thank Heidens Hart Records for making this available to you once again for your listening pleasure.