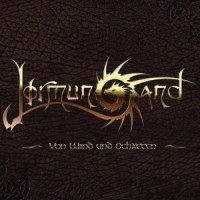 Germany’s Jörmungand may be familiar to some of you as they have existed as one entity or another since 2009 whether as Jörmungand or for some time as Soulreaver. They have returned to the Jörmungand name and issued their first full length
with some original and new members entitled Von Wind Und Schatten (“From Wind And Shadows”) Not being really familiar with them, I didn’t know what to expect style wise but I assumed there would be some folk or Viking metal element to it, which is not readily apparent here upon listening. I guess I shouldn’t “judge a book by its cover” or in this case by band name…..there is more of a melodic death/pagan/black metal vibe in a majority of the songs with maybe some touches of thrash and folk/Viking. There is a diverse selection of song styles here which I normally am a huge fan of, but I don’t know if it necessarily works as well in the case of this album. I think ultimately what any band strives for is a “signature” sound so that as soon as you hear a song from that band you say “Hey that is (insert band name here)!!” Jörmungand I believe are still seemingly in a transitional phase into finding out where they want to go direction or style wise. There is a mix of older songs as well as newer ones here so you are getting a history lesson of sorts in what they have done over the last few years. A few bright spots for me are tracks like “Der Name des Windes” and “Eis und Feuer”, where I like this type of Jörmungand song the most……epic folk tinged songs with keys/additional instrumentation and both clean/growl vocals and a story to tell. It probably is no coincidence that these are also the two longest songs on the album.
Maybe with time they will take future songs and let them grow on the vine a little longer before plucking them off and offering them up for consumption. If they decide to stay with a little bit of every style on future releases, you will have to decide which version of Jörmungand resonates with you. “Von Wind Und Schatten” is a decent first album with hopes of a more focused next release in the future.