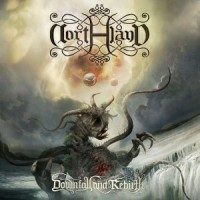 It has been a long 4 years since the first self-titled album from Spain’s Northland. With plenty of touring and festivals over the last few years, as well as waiting for the recovery of drummer Jose Resendo from a motorcycle accident, we finally have a new full length entitled “Downfall And Rebirth”.
Besides it being a full length, they have decided to tackle those potentially two dreaded words …the ”concept album”. In cases like “Operation Mindcrime” by Queensrÿche or “Dimension Hatröss” by Voivod (to name two of my favorite concept albums) I believe they succeed where the songs can be independent of each other and not rely on the other songs to make sense or having to be played in a certain order all the time. Fortunately Northland have followed that template here.
Conceptually, they are writing songs about Mother Nature rebelling against mankind on this album. A pretty lofty assignment. If you have not heard of them before, I would link them sound wise to maybe a toned down Equilibrium or a folkier version of Wolfchant, but you will hear their numerous influences across folk metal in general here. If you are a big fan of traditional folk instrumentation, you will certainly get your fill here as almost every track highlights Pau Vázquez riffing on violin which is the catchiest part of this album for me. I wish there was a little more diversity here in song style however as the songs seem to start blending together, although maybe that is a good thing when creating a concept album. “Downfall And Rebirth” and “Duskriders” are my two favorite tracks as well as “Moonlight Spell” the most memorable track here, since it features a female vocalist and is more acoustically driven and simpler/accessible than the other tracks.
Production is definitely better than the first album with a more natural sound for the vocals, keys and violin with smooth tones while still retaining the edge for the guitar, bass and drums. I believe it misses in selling the story musically, unlike the latest Skálmöld album from this year “Með vættum” which hits both marks of concept album and standalone songs.
Luckily, “Downfall And Rebirth” is not enslaved to the fact that it is a concept album and songs can picked out and played live without having to play all of them.
This is still a good album and definitely worth checking out.