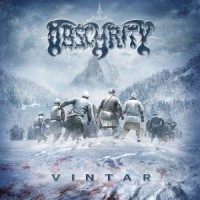 Although Obscurity has been present in the scene for quite a while, it was not until last summer when I had the pleasure to get to know them. The German Viking death-metalband who came into existence in 1998 were present at the Dark Troll festival, where they left a good impression. Time to get to know the band a bit better, and how could we do that better than with the 7th studioalbum of the band, called ‘Vintar’?
Vintar is a conceptalbum, which takes place just after the Ragnarok, the end of times according the Nordic Mythology. A new land came into existence that’s called ‘Wodanheim’, and all stories told in the songs resolve around and in this new world. Although the concept is a bit weak in my opinion, the music itself definitely isn’t.

Musically speaking, the band is quite similar to Amon Amarth. The style could be described as melodic, guitar-orientated death-metal with lyrics about Nordic Mythology. However, Obscurity is way harsher in their approach of Viking death metal than Amon Amarth. Where Amon Amarth tends to sound too overproduced, Obcurity is not even aware of such things. Brutal, raw and ‘in-your-face’ are things that come to mind when listening to Obscurity. The band is harsh, sounds heavier and isn’t as easy to sing along as the cuddly Vikings from Amon Amarth. However, the music always has some sense of melody. Here and there, some black-metalinfluences could be heard, especially in the vocals and the guitars, which ensure the songs get a dark and impendent. The overall speed is high, so ideal for headbanging!

Although the concept is quite mediocre, you won’t notice it when listening to the music. The songs are fierce, but with a lot of melody. Do you like Amon Amarth, but does it sound too polished and isn’t it brutal enough? Then get the new Obscurity album immediately! Fans of Viking-metal, or blackened death-metal in general could appreciate this album. Definitely worth checking out!