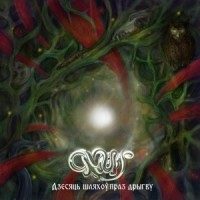 Omut from Belarus has finally released a full length album entitled Dziesiać šliachoŭ praz dryhvu (“Ten Paths Through The Swamp”). I am not sure why that a band that has been in existence for 10+ years have waited so long to actually start recording music so far into their career. It appears that they have a relatively stable lineup so whatever the reason it doesn’t matter as this is a genuine, quality folk metal release.
Assuming you have not heard them before and without having to resort to always saying that a strong female vocalist in the band sounds like Arkona, they have a sound more akin to Kivitmetsän Druidi or Dalriada but the closest I think would be Grai. Female vocalist Elvira and male vocalist Alies trade vocals off in tracks like “Z kryvioju vaŭka” (“With The Blood Of The Wolf”) and “Šery husi” (“Gray Geese”) effectively well, spinning tales of legend and lore from their homeland. We have all gotten used to hearing folk metal with strings and whistles being the primary folk instruments so it is a nice change of pace hearing Bayan (accordion) being used so tastefully well here by Jury. The rest of the band (Kiryl-guitar, Vadzim-guitar, Lorina-bass and Nazar-drums) really have a groove going here and I was immediately reminded of Skálmöld, although not as thrashy/heavy but a very reminiscent sound with more variety in song style.
From a production perspective, a very nice mix here, accentuating all instrumentation without sacrificing mood and clarity. For everyone that is stuck on the notion that the “best” folk metal is from Finland, Ireland or wherever had better take note…..eastern Europe has equally amazing bands (like my recently reviewed album by Brezno) and Omut is definitely one to pay attention to. We should all be thankful that the 10 years without an album from them is finally over… great album.