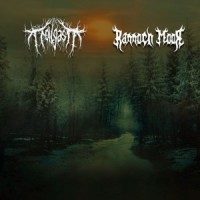 This release was announced a long time ago. And until the releasedate there was not much to be found about Rannoch Moor. But now this is split album is released we discovered Rannoch Moor is a kind of project in which three people are involved, amongst them is Tim Read of Trollgasm.
Trollgasm is quite an average band, which doesn’t mean they’re bad, no not at all. But as we wrote in our review on ‘The Northern Winds’ last year, it’s not very special. The vocals aren’t the most beautiful ones and there’s nothing changed. The first song ‘Mead Fiend’ is just as the songs on the previous album, just a song. Nice, not special, the second one on the other hand ‘Heads for the Taking’ has this strange violin again. The violin was a fine add on the The Northern Winds and we’re glad it is back, and it gives it again a very nice add. It’s a kind of weird madmans violin, which gives the track a very nice feel.
After these two Trollgasm songs we get the two Rannoch Moor tracks. The last track of this album ‘The Three Philosophers’ is a kind of Alestorm-like track. The very very straight forward drumming is quite boring and this is once again ‘just a song’.
The track Rannoch Moor by Rannoch Moor on the other hand is quite a nice one. What a pity of the lead vocals in this track. The song is majestic, has epic keys and it has a great heroic feel.

Heads For The Taking and Rannoch Moor, are the two fine tracks of this short album. I hope we get to hear more from both bands. Trollgasm proves again they are capable of making nice songs and Rannoch Moor created a song which was stuck in my head for a few days.
But I wish both bands will do something about the vocals, they’re just not working for me. But why don’t you give it a try for yourself, it’s availlable at their bandcamp.