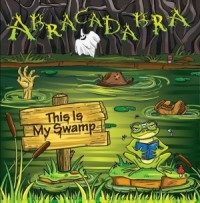 With a name like Abracadabra, I couldn’t help thinking this was going to be some kind of halfhearted, lame, semi-symphonic hard rock with big hair and spandex… man I couldn’t be more wrong. Abracadabra play killer catchy folk metal, filled with some swampy goodness. I recently reviewed the latest LP from Рогатый КолоколЪ (Rogatiy Koloko) and Abracadabra has a lot of the same influences or similarly sounding bands in my opinion. Svartby surely are akin to Abracadabra (they are both from St. Petersburg, Russia) with a little bit of old Beer Bear, Troldhaugen and Finntroll thrown in as well. There is an amazing amount of sound coming out here as they are only a four piece (Ivan on Bass, Konstantin on guitars and vocals, Vasiliy on drums and Nina shuffling between keys and flute).
Considering they formed in 2013, the songs on “This Is My Swamp” have a seasoned feel to them as Abracadabra does in general, sounding like a band that is well into their career on sure footing and knowing their sound. Usually, we are asked to wait for an album or an EP or two before a band settles in, but not in this case. They have put the work in up front to deliver this murky masterpiece. The songs average about 4 minutes in length or so and for this style of folky polka/humppa melting pot, they have the right recipe.
Songs about poltergeists (“Naughty Ghosts”) and boozing (“Drunken Song”) are certainly on the checklist for a fun listen along with more boggy centric tunes (“Critters And A Bloodbath” and the title track) which seal the deal for me. Despite the cartoony name and cover artwork, this release is a quite a tasty treat and a real surprise with a good mix, a great blend of metal/folk and easy to get into songs. The next night that you want to just party hard and need a folky fun soundtrack, this should be way up on your playlist.

Let’s just say this…..If you get lost in the woods and stumble on some old hag stirring a bubbling cauldron, don’t be afraid. It may be filled with newt eyes, bat wings and frog lips so just grab a bowl and pull up a lily pad since it tastes just like Abracadabra’s first album…..”This Is My Swamp” is a hearty heaping of scummy pond folk metal…yum yum…