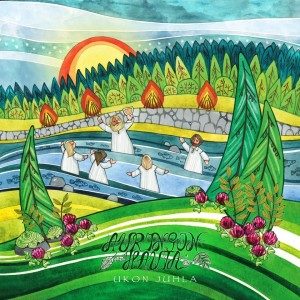 Auringon Hauta of Finland was formed out of the disbanding of Solgrav back in 2009 (both names mean “Sun Grave” in Finnish and Swedish respectively). They released their debut LP in 2010 entitled “Muinaisia muisteloita, noita syntyjä syviä”.
Now we have arrived at their next full length “Ukon Juhla”, which continues in the same direction as the first LP, incorporating their death/black/pagan metal beginnings with a distinctively Finnish folk sound. Of course, playing folk metal and being from Finland will open the door to comparisons to Korpiklaani and Finntroll and I think they kind of fit in between the two rather well….the heaviness of Finntroll combined with the some of the folkiness of Korpiklaani. They tap back into their past from their pagan metal beginnings with some blast beats but it really comes thru especially in the lead vocals department, where Niko really has a death growl for the ages, although not used all of the time. Guitarist Janne takes over in the clean vocal area to add another dimension to the songs. This makes me remember listening to Amorphis’ album “Elegy” where I fell in love with the dark growl along with the clean vocal style.
Songs like “Ukon Malja (The Chalice For Ukko)” and “Suurvalkia (The Great Fire)” have a “Manala”-era Korpiklaani vibe to them. I don’t know if there are any real stand out songs here for me and I think this is what differentiates Auringon Hauta from the other bands that we are very familiar with. The songs are good but there are no real strong hooks or chorus parts that make the songs individually more memorable than another.
I still enjoyed listening to this album and it is definitely worth checking out for sure. Hopefully in the future the next release will have some “catchier” material on it that will get stuck in my head like songs like “Rauta” and “Häxbrygd” did for months on end…..