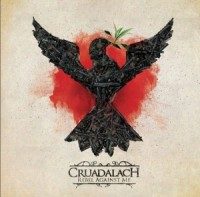 I would like to think that everyone who reads the reviews on this site does not just listen to only folk metal (although not a bad thing for sure) and have a well-rounded history in metal listening of all sub genres in general. If not, then Cruadalach could be one of those bands that will encourage you to seek out some other forms of metal to delve into (particularly some hardcore/crossover) from the 90’s and maybe some more recent releases. Sounding like old Angkor Wat, Biohazard, Crumbsuckers, Pro-Pain, Agnostic Front and a lot of NYHC with folk instrumentation will probably put a lot of you off kilter. This Czech 8 piece seemingly have more in common with “American Hardcore” and less with “European Folk Metal” which is amazing considering you have so many folk instruments here (pipes, violins, flutes, whistles, etc.) There is enough folk instrumentation to get you thru but this is certainly a heavy release where moshing is not only encouraged but mandatory.
Just when I could never image folk crossing over with hardcore, Cruadalach have proven me wrong. Most of the time bands end up gravitating towards the Celtic punk sound or ultra-fast folk/humppa sound but not here. I feel “Rebel Against Me” is a definite continuation of 2011’s “Lead-Not Follow” but with more focus towards heaviness with songs that are more anthemic and angry. Tracks like “Revolt Without A Name”, “Earth Café” and “Life Worshipping Bastards” will make you want to lace up you Doc Martens and get into the pit and throw some elbows. For my friends who are big into hardcore music, this is the album I would give them to get into folk metal without question.
Now, let me go get directions to CBGB’s and dust off my old The Accused, Forced Entry, Sick Of It All and Cro Mags albums since Cruadalach have made me want to listen to these old crossover classics again…..”Rebel Against Me” is another album that redefines what folk metal is.