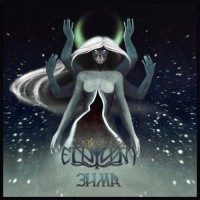 Russia’s Eldiarn are back with a new EP featuring 7 songs entitled Зима (“Winter”). Their last effort, a full length entitled Кабаньей тропой (“Hog Trail”) shows that Eldiarn are nothing if not efficient as this was just released in the fall of 2013.
There has been a lineup change recently as Geran and Alexandra replaced Sergey and Evgenia on guitar and violin respectively in 2014, but this was after the recordings were finished. Eldiarn play straightforward folk metal with a definite background I think in thrash based on what I hear in their tracks… double bass and blast beat drums, crunchy guitar riffs, twin guitar playing and tempo changes and harsh vocals (with some tenor style) provided by guitarist/vocalist Evgeniy. Pavel and Vasily (bass and drums) lay down the pounding, sometimes semi-frantic pace to now add Alexandra’s violin playing on top and you have the Eldiarn sound in a nutshell.
Whatever their previous endeavors, Eldiarn have created a surefire strategy for catchy songs. The tracks are decidedly up-tempo in most cases with some mid-paced parts as well but not wild or out of control, as there is melody here especially because of the violin. I think they sound like some Niburta, SuidAkra or Vanir but I think with more of a folky vibe than these bands may offer… even thrash titans like Testament, Sepultura, Kreator and Sylosis I could hear at times.
The recording is definitely solid across the board, a decent mix most notably in the clarity of the rhythm section being audible even with twin guitar, violin and vocals on top. Tracks like Волчья (“Wolf”), Русская Водка (“Russian Vodka”) and Пляски на могиле врага (“Dance On The Grave Of The Enemy”) will have you banging you head and then change gears with an interlude part of sorts and then back into the breakneck parts again.
All the tracks are on par with each other here and that is what I like the most about Eldiarn is they are consistent. At an average time of 3 ½ minutes a track, they pack a lot of energy and riffing into the songs, but not overly busy or annoyingly so.
This is definitely another quality release from Eldiarn and one that you will want to listen to next time you want to rock out, work out or just folk out. Great release.