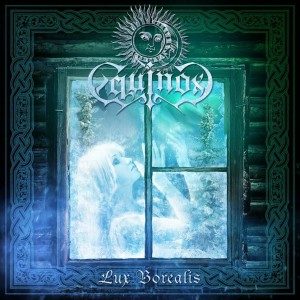 Equinox-Lux Borealis (7.5) Hopefully, the name Equinox will resonate with some of you as the reformed version of what used to be Beer Bear. If you are not familiar with them, they were a folk metal band from Russia who put out two great albums (“Honey” and “Beyond The Invisible Line”) and an EP and then for whatever reason decided to call it quits. Out of the ashes of that end is now born Equinox. They did put out a 2 song EP called “Beyond” earlier this year which featured a reworking of the song “Beyond The Invisible Line” and a cover of Iron Maiden’s “Brave New World”. I remember listening to the EP at the time and wondering what I was listening to since this had no noticeable connection to the old folkiness of Beer Bear, since it was much more symphonic and had a more serious feel to it.  So at least I was prepared for what I was going to hear with next Equinox offering in a 6 song EP called “Lux Borealis”. First off, they have included the two songs from the “Beyond” EP here so four new songs. The best advice I can give is do not compare this to Beer Bear at all since they are entirely different projects. From the beginning of “Сон Вратиаса” (“Sleep Vratiasa”) you will hear how this is more vocally/melodically driven band now with the operatic styling of Alla Ravna who powerfully takes control here. Trying to give you a band to refer to here is tough…..the first ones thatcomes to mind is Leaves Eyes, Trans- Siberian Orchestra  or some of Sara Jezebel Deva’s catalog although still more rooted in folk and traditional music and not as riffy/heavy. After a few listens this will grow on you as it has me…..it really has a soundtrack or theatrical vibe to me, like “Phantom Of The Opera” or “Les Miserable”.  Songs like the title track and “Зов Северного Ветра” (“Call Of The North Wind”) are just great listening songs and are well crafted, beautiful tracks. This is why I guess you need to really give things a chance as I was almost not going to listen to this, but I was pleasantly surprised by how great this release is. For those of you waiting for the resurrection of Beer Bear, you will not find it here. Instead, you will find an entirely new band to get into with Equinox. They definitely need a full length on the horizon soon…. this is a band that I think could really pull off a concept or theme album based on what I heard with Lux Borealis.