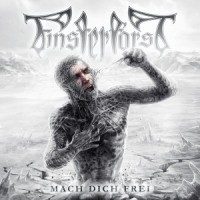 Finsterforst is back! Three years after the fantastic ‘Rastlos’, the band is back with the album ‘Mach Dich Frei’. Since Rastlos is one of my favourite pagan-black albums, my expectations were really high for this album. However, did the band manage to fulfil them?

The answer is easy, and that’s yes, they did it. Mach Dich Frei continues where Rastlos stopped. Almost 75 minutes is usually a long time for a metal-album, although when Finsterforst plays it’s over before you know it. Dark pagan-black, with additional acoustic intermezzos, keys and accordion, with an overall sound that sounds more and more like Moonsorrow. The songs are long, and are all building up towards (sometimes multiple) climax(es). The vocals are raw and shrill, but are interchanged with epic choirs. Finsterforst creates a sound where it’s possible to discover something new every time. Even after years I still notice subtle melodies on Rastlos, and I’m sure it’s no different with Mach Dich Frei.
After a short intro, it’s time to enjoy Finsterforst for almost 1 hour and 15 minutes. As said before, this album reaches (sometimes a bit too much) back to the previous album Rastlos. The keys are a bit more prominent, though they serve more as accompaniment instead of the main melody. The accordion, however, got a slightly bigger role. The overall style of the songs seems to be a lot harsher and darker, even though the great, full and epic sound that is provided through the keys and the choirs. Especially the song ‘Zeit für Hass’ sounds harsh.
Close towards the end there’s a song called ‘Reise Zum…’. Although it’s a song of more than 5 minutes, it solely serves as an atmospheric introduction towards the most epic composition on this album called ‘Finsterforst’. This song of epic proportions which is over 24 minutes long is the perfect closure for Mach Dich Frei. Finsterforst shows every aspect of their music in this song, whether it’s an acoustic, calm intro to harsh black-metal, and everything in between, great!
The conclusion is easy to guess. Although this album came out early in 2015, it’s definitely one for the toplists made at the end of the year. The only ‘downside’ (although that’s a big word), is that the album sometimes sounds a bit too much like Rastlos. Nevertheless, Mach Dich Frei is a great album in the pagan-black scene, so make sure you check it out!