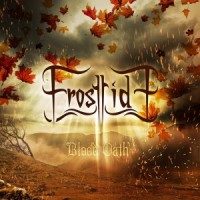 The Finnish company of Frosttide has had quite some turbulent years. The relatively young band that was formed in 2009 released its first full-length album ‘Awakening’ in 2013, followed by a massive Heidenfest tour with folk metal giants Ensiferum, Equilibrium, Turisas and Suidakra. After that it became silent around the band, but in 2015 the band finally released its second full-length album called ‘Blood Oath’, an album that will surely appeal to a wide audience.

Starting from the very first notes of the album, my expectations are very high. ‘Prologue’ is an epic intro song with a great overall structure that seamlessly works towards the title track of the album, ‘Blood Oath’. This is where the guitar and drum violence erupts and perfectly merges into one melodic and bombastic whole. The instrumental passages remind me of the work of Wintersun at times, and each have a great construction. Besides the instrumentation, the vocals are of a very high level as well. The grunts are regularly interspersed with instrumental interludes and background choirs, creating a dark and epic atmosphere. This atmosphere can mainly be heard in the song ‘Gates of the Asylum’. The somewhat chaotic rhythm works towards a beautiful instrumental passage which then flows towards the climax of the song. The structure of the song is nothing short of genius, and indicates that the band has experienced a tremendous growth in a relatively short time. Although the music might not always sound very original, the band has still managed to create a unique sound of its own, that in terms of genre balances on the line between folk metal and melodic death metal. The album continues its path with ‘Fate Redefined’ and ‘Traitor Within’, some up tempo songs that really manage to keep the atmosphere of the album, only to end up in the powerful track ‘New Reign’. This song, lasting over 11 minutes has everything you’d expect from a track like this; a great overall structure, solid drumwork, great guitar parts, bombastic instrumental passages and a fine alternation between grunts and background choirs. The track is a small work of art in itself. The album has a worthy ending with the equally epic ‘Winds of Winter’s Call’, that really fires things up one last time before working towards the definite end. Again, the variation between the instruments is very well highlighted, and there is plenty of space to put keys in the spotlights once more. When the last notes of the album start playing I can only say that this album has a great structure from beginning to end. The album has some great highlights and the transition between songs is smooth and well contemplated. Altogether, Blood Oath has become a great album that definitely scores above average, and is easy to listen to.
Although the band drops some points for originality here and there, Frosttide scores far above average with Blood Oath. The tracks are varied and diverse, but seem to go really well together so that the album still clearly sounds as one whole. There is enough variation between the grunts and background choirs. The instrumentation is above average and proves once more that we are dealing with a very talented band here. Do not let this album pass you by, and do not forget to check this guys live on stage during the next Paganfest tour!