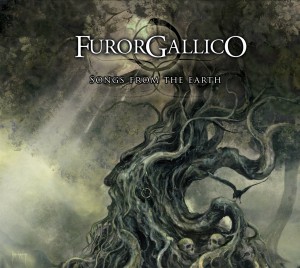 I am happy to say that 2015 is going to be another great year for folk metal with tons of releases to look forward to, including the latest by Italy’s Furor Gallico entitled “Songs From The Earth”. Four years ago, they released their epic self-titled full length which gave us a nice mix of acoustic and traditional instrumentation, folk metal riffs and various vocal styles in both Italian and English.
“Songs From The Earth” is more of the same… if it is not broken, why fix it? There have been some lineup changes: Mirko, Marco, Mattia and Riccardo replacing Simo, Fabio, Stefano and Laura on drums, bass, guitar and violin respectively, as recently as this past year. Becky (Celtic Harp) Luca (Guitar) and Davide (Vocals) are the 3 remaining original members with Paolo (Whistle/Bouzouki/Bagpipes) joining in 2011. The change in members has not altered their basic blueprint in sound, so do not fear as this sometimes can be a major concern. The first thing that is apparent with the new album is that there are less songs (no instrumentals which could be deemed as “filler” material) and that the songs are longer…generally a sign to me of a maturation in the song writing process and to let ideas and songs breathe a little and not stifle them. I would actually say they have gotten heavier but still have tons of the traditional/acoustic arrangements in every song, with special emphasis on the Becky’s Celtic Harp and Paolo’s ability to play multiple instruments.
I think they sound a lot like Lepoka (Spain) or Trobar (Canada) but with maybe a little more emphasis on the folk instrumentation but there is plenty of metal intertwined in the songs as well. Tracks like “Wild Jig Of Beltaine” and “To The End” were a pair of standout songs for me, but really all the songs are on par with each other.
I cannot say I am a big fan of the overall mix of this album though. The individual parts are there and you can hear them all quite well but they are not really cohesive and sound disconnected to me somehow, especially with regards to vocals both main and background. The guitar sounds very flat, “boxed-in” or compressed and does not cut thru like it did on the original album, which had a more transparent and open sound in comparison.

Despite my perception of flaws in the mix and overall sound, this is another valiant effort by the Furor Gallico clan. If you enjoyed the first album, you will certainly enjoy this one as well. Good album and a great way to usher in 2015…