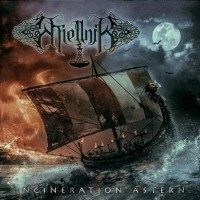 If you do a little research on Miellnir, you will be perplexed as to why a band that has seemingly been in existence since 2005 are now finally putting out their very first release with “Incineration Astern”. Without having an answer, let us just assume that it was to finely craft a Viking metal epic like this one.
These Ukrainian warriors have landed on the map somewhere on the borders of Amon Amarth, Manegarm and Thyrfing and I think also remind me a little of bit of Helsott and Dissection. Vocalist Yarek Ovich would give Eric Dow and Johan Hegg a run for their money in the low rumbling death growl department for sure. Although definitely a Viking metal release, the songs are not painted into that corner and have a nice mix of song style and tempo with some up-tempo and some mid-paced/slower tracks.
They definitely get their folk on with “Ugar-Buhlo” with an accordion and humppa beat combination but most songs tend to be more straightforward Viking with some diversity in style of Viking track. I would technically not say this is an album per se but rather an EP with 4 previous released bonus tracks. The newer tracks starting the album with the instrumental “Incineration Overture” into “Prey” will have you ready to jump onto the deck of the long ship and raid the coast. The newer songs have nice touches of keys to break it up, but still heavy enough to keep your fist or horns in the air.
The bonus tracks are nice here too, especially to see how far they have come in song writing and production so kudos for their inclusion here. “Valhalla Awaits” should be the soundtrack to your next melee. Whatever the reason for the delay in release, it was worth the wait. With releases by Ensiferum, Manegarm, Enslaved and Hammer Horde slated for this year, they have beat them to the punch in delivering a great Viking metal release… now form a bucket brigade, Miellnir is burning the village to ground and plundering our gold….