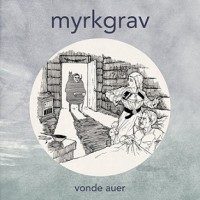 In 2013, Myrkgrav released the stellar EP “Sjuguttmyra” with 4 blackened and Viking tinged folk metal tracks with hopes of a proper full length hopefully looming on the horizon. We do not have a full length yet but a new single entitled “Vonde auer”, which features two different versions of the title track…the “Myrkgrav” version and the “traditional” version.
My brother-in-arms at folk-metal.nl Nick in his previous review likened Myrkgrav to Tyr and Enslaved, which I can definitely hear but also maybe a little Borknagar and Korpiklaani as well. Myrkgrav is a one man project, he being one Lars Jensen of Norway, who now resides in Finland. Lars does all of the instrumentation with the exception of the Hardanger fiddle (Norwegian 8 or 9 string violin) played by Olav Luksengård Mjelva. Clocking in at just under 9 minutes between the two versions of the song, you will definitely be longing for more. The main version at just over 6 minutes features everything you want in a great folk metal song…. traditional instruments, triumphant vocals in solo and chanting/choral styles, catchy riffs and a variety of rhythms to add texture to the track, giving it a very story-rather-than-song feel. You then get to hear an alternate version at just under 3 minutes where it is a stripped down variation to just the Hardanger fiddle played by Olav. And then, unfortunately, the recording is over.
Myrkgrav is well overdue for a full length (there only full length “Trollskau, skrømt og kølabrenning” came out in 2006) but we have to settle for whatever the artist offers us and this is a quality release from the songs to the production. Here is where we are at the crossroads of the future of music… no record label means a possible lengthy wait between new material versus artistic freedom and the ability to create music without compromise. In the case of Myrkgrav, I will patiently wait for the latter for whenever Lars/Myrkgrav is ready to put something out again… hopefully sooner rather than later.