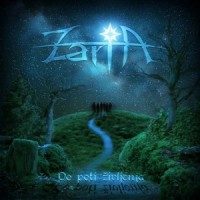 In a recent review, I eluded to the trend that Eastern Europe seemed to a hotbed of up and coming folk metal with recent releases by Equinox, Omut and Brezno leading the charge. Add to that list the first full length from Zaria with “Po Poti Življenja” (“Upon the Trail of Life”) following the release of an EP “Sij Obzorja”
(“The Glow Of The Horizon”) in 2013. Being from Slovenia, the immediate comparison to Brezno (also from Slovenia) will be readily apparent. Delving even further, 2 ex members of Brezno (Inez on Vocals/Flute and Miha on Guitar) formed Zaria in 2011. Whatever their reason for the split from Brezno is inconsequential, as now we have another great folk metal album to listen to…
I am reminded of the phrase “divide and conquer” in this case. Hopefully, they are both happy co-existing as the best folk metal bands in Slovenia, which they are. They are both drinking from the same folk metal well it appears in terms of style, song structure and overall feel to the songs. Zaria seem to be a little folkier with Inez on flute making the difference here (Brezno I would call more symphonic in comparison) but I really am splitting hairs. Tracks like “Glas Srca” (“A Voice From Within”) and “Nov Začetek” (“A New Beginning”) spin a richly layered tale with a strong metal foundation topped with beautiful vocals and the keyboard work/backing vocals of Gašper. Miha and Jakob’s guitar playing reminds me a lot of classic Accept with very catchy riffs especially at beginning of songs like “Divja Jaga” (“Wild Hunt”) and “Pozabljeni Svet” (“A Forgotten World”). Rok on bass and Nika on drums set the pace here with the right amount of tempo and tasteful note selection without over doing it.
A spot on production is also adding to the quality of this release…..vocals are warm and instrumentation mix is harmonious, even when all are playing/singing at the same time. I hope that the members of Zaria are OK with me comparing them to Brezno since I find them very similar in a number of ways…..catchy, textured, genuine Slovenian folk metal played by a great band.
If Zaria had released their album first, I would be comparing Brezno to them instead. Another great album.