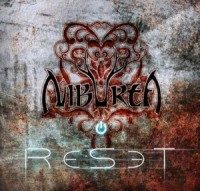 For those you who have worn out your copy of the last Niburta “Scream From The East” from 2012 (like me), you can now give it a rest as they have just released a 3 song EP entitled ReSet. If you are unfamiliar with them, they describe themselves as “Balkanic Folkmetalcore” which is as perfect as it gets.
They are definitely one of those bands that push the boundaries of what should or shouldn’t be “folk metal”, but since there is so much traditional instrumentation along with the electrics, that they really actually personify what “folk metal” is all about. I think what really make Niburta stand out is the diverse styles of tracks…..think of the Hungarian version of Korpiklaani, Eluveitie and Yonder Realm rolled into one. Well, that was before I heard ReSet…and now they have thrown us for another loop and probably could use another few bands lumped in to describe what we have here. With all of the other things they normally have going on, they have basically kicked it into overdrive on all levels……over the top guitar work, breakdowns galore, schizophrenic arrangements, instruments and vocal trade-offs/style changes that make you shake your head. If I didn’t know any better, I would think they have been listening to a lot of Rammstein, Faith No More, Voivod, Evanescence and, dare I say, a lot of death metal. Don’t get me wrong…. this is still Niburta at its core but an amped up version to say the least. The three songs “ReSet”, “Two Faced” and “Evolution” make sense in terms of where they are now and how they got to today if you listen to their previous work before this….you can see it coming to this point or at least the potential to. If you are experiencing Niburta for the first time on this EP, you may be taken aback since it could be considered a pretty intense listen. I was reminded of a couple of years ago when I was looking for a crazier/out of control version of Finntroll and discovered our beloved Trollfest. In this case, if I was looking for a wilder version of “Scream From The East” Niburta. I would just listen to the new Niburta EP. Just like a roller coaster, the first time you ride it, you might be frightened half to death, but the next time you are ready for the thrill of it all. Jump on board the latest ride from Niburta…. it will probably become one of your favourites in just a few tries.