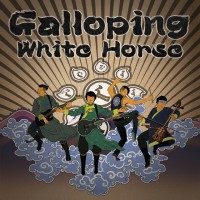 China’s Nine Treasures have been busy in the last year or so with the release of a self-titled LP back in May of 2014 plus a lot of touring and now have a new EP called “Galloping White Horse”. The EP features 2 new songs plus 3 live previously released songs. Singing in their native Mongolian (they hail from the Inner Mongolian region in between Mongolia and China) Nine Treasures certainly know how to create upbeat and fun to listen to folk metal. The first band I think of when listening to them is Metsatöll for sure, especially because of the use of the Balalaika (Russian stringed instrument) and more notably the Morin Khuur (Mongolian Horse Head Fiddle). This instrument really has a unique sound and fits well in a folk metal setting, almost acting like a lead or “slide style” guitar in some cases for me.
The title track gets things hopping for 3 ½ minutes before the next track “Through Pain” continues the folk fest going, both tracks reminding me of all the classic, fun up tempo songs you can think of….”Vodka” and “Trollhammaren” come to mind. They then offer three live tracks from their first LP “Arvan Ald Guulin Honshoor”, the title track, “Nuutshai Chadal” and “Nomin Dalai”, nothing special here just live versions pretty close to the originals. The songs are short which you would think would almost lend a punk feel to Nine Treasures but not necessarily… the songs are not slapped together just to get them over with but played to where the songs have ended naturally. I generally like to hear longer songs to get into them more but Nine Treasures overall sound does not really lend themselves to that and would probably not be a fun listen if they changed or slowed their tempo.
Provided they stick with the up-tempo, fun songs and writing in this style I, for one, will keep listening. I have become a huge fan of Nine Treasures, a real breath of fresh air from our folk metal brothers from China.