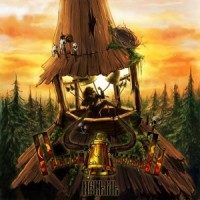 In a recent review, I had eluded to times in the past that I had gotten “used to” a certain band’s sound (however extreme they may be) and then pondered if there was something or someone to replace them in pushing the boundaries of folk metal. For example, the recent Niburta release (“ReSet”) is a great example of this.
Now, the first full length from Russia’s Rogatiy Kolokol joins that distinguished club. Although released in late 2013, we are just now getting a chance to review their first full length “Небыль” (“Tall Tale”). I am immediately reminded of some of my favs: Trollfest, Svartby or Trollgasm in their sheer audacity and “punch you in the face repeatedly” sound. Bands such as these, for me, bridge the gap between folk and thrash/death/black metal without ever straying too far in any one way or the other… A perfect blend of catchiness and brutality. Now, not every song from Rogatiy Koloko is non-stop blast beat. There are moments of pure folk from their native Siberia in tracks like “Юдоль” (“Vale”) beautifully crafted with whistle, accordion, flute and female vocals. There are also tracks of more straightforward folk like “Идолище” (“Idol”) intermingled in some of the more out of control songs like “Пьянь” (“Barfly”) and when I use the term “out of control” I mean “faster or more bizarre than the other already fast/bizarre songs on this album”.
I would like to think that this an album that if you are a death metal fan and are not sure if you could get into folk metal, that this would be your gateway…..think of Cannibal Corpse and Alestorm collaborating on an album together. The songs are more linear than most death metal songs tend to be… No overuse of breakdowns or a million notes per riff so at their core they are just an extreme folk metal band with a death metal influence. In due time, they may feel they need to slow it down, but why when you differentiate yourselves with your speed and folkiness? I am not sure what is in the water that Rogatiy Koloko is drinking, whatever it is, bottle it up and ship it to me immediately. It must be filled with death metal and folk metal vitamins…