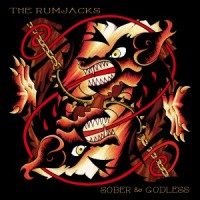 The wait is nearly over! The Rumjacks new album, ‘Sober & Godless’ is set to be released in February. I was graciously allowed an advanced listen and these are my thoughts on the upcoming release. My deepest appreciation for being allowed the opportunity!

When I first received this album it took a short while before I could listen to it. Reason being is that I had waited so long for a new album – it had been 4 years since the release of ‘Gangs of New Holland’. Would ‘Sober & Godless’ be as good, how would it measure up?

If you are like me, the first thing you will want to do is compare ‘Sober & Godless’ to ‘Gangs of New Holland’ – don’t do this! A lot has changed in the 4 years between the two releases. Let the truth be known ‘An Irish Pub Song’ has already been written, it was excellent but now it’s time to move forward. While I loved this album from the get go, I truly was not sure what to expect at first. Let me assure you this album continues to get better with every play, it is nearly organic.! I continue to hear new bits I had previously missed. ‘Sober & Godless’ is anRJP12 amazing album by the same Rumjacks we have come to love. The only difference is they are a little older and possibly a little wiser?

While they still celebrate the imbibing of a alcoholic beverages and possibly a good round of fisticuffs they also have shown some deep insight into their country and heritage. In every song there is a unique story; something that seems to be a trademark of quality Australian music. Frankie said it best during the interview I did with them, “We’re not just looking back at ‘a peoples’ story’, we ARE those people, and our story continues.. “

The best way I can describe this album is as an onion, a really magnificent onion! There are so many layers within this album; Celtic, Punk, Folk, Traditional Scottish, that unique Aussie sound and even a healthy dose of Ska riffs, but they are all layered on top of one another (Like an onion) to create a massive, expressive and well rounded album. While it might sound cliche, there really isn’t a bad song here. Though if I had to pick a few, I really enjoy ‘Sober & Godless’, ‘Leaky Tub’, ‘Home’ and ‘Tam McCorty’.

If any other band were going to come back after a 4 year break, they would be lucky to be as focused and produce an album this good. It is not ‘Gangs of New Holland’ – it is ‘Sober & Godless’ and it’s even better than ever!