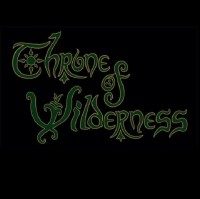 Hailing from the Buffalo/Rochester area of NY USA, Throne Of Wilderness have just completed work on their first self-titled demo feature 2 original tracks. This 6 piece formed in 2013 and will definitely fulfill your need for upbeat and catchy folk metal and probably more traditionally so then most American folk metal I have reviewed recently (like Yonder Realm,
The Flight Of Sleipnir, Helsott, etc.) While those awesome bands tend to be a little more metal (thrashy, doomy and pagan respectively) with elements of folk, Throne Of Wilderness tend to have more of a folk element in the foreground, namely due to the keys/accordion of James and the whistle/vocals of Allana.
If I would give you 2 bands that jump out at me as similar they would be a folkier version of Hammer Horde from the US or definitely Grimner from Sweden, although not really Viking metal like these bands are.
Opening track “Victorious Revelry” get things going with a fun upbeat track reminiscent of early Korpiklaani. The song is filled with Kevin and Josh’s guitar work with Jason and Eareckson laying down the groove on bass and drums. Kevin pulls double duty on vocals as does Allana with backing vocals. The second (and sadly) last track is “Fauna Fete” which is an extremely apt title because that is exactly what it sounds like…..a party in the woods in the middle of nowhere under a night sky, campfire blazing and alcohol flowing. For a demo this sound better than most but there is definite room for improvement…..instrumentation sounds a little flat or thin and the mix is a little plain.
Sound quality aside, the quality shines thru for sure and that is what counts. Let’s hope that a proper EP or full length is coming soon and that an investment is made for a good sound engineer to mix the new release. There is major potential here on the next release as I know they have a lot of things to show us and are chomping at the bit to show everyone what they are capable of. For now, you will just have to put these two tracks on repeat and listen to them over and over, which is what I am doing right now……Mark my words, big things loom in the future for Throne Of Wilderness. Great debut.