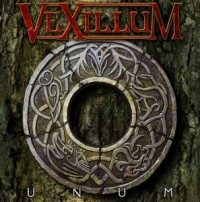 Power folk metal merchants Vexillum are back with their latest full length entitled “Unum”. This 5 piece from Pisa, Italy have entered dangerous waters… the swirling waves of the dreaded concept or theme album. As I have mentioned in previous reviews (the recently reviewed Northland album) that these style of albums succeed to me where songs can be enjoyed independently of each other and luckily we do have that here with “Unum”.
For those not familiar with Vexillum, Elvenking and Rhapsody Of Fire are no question similar in sound with some Helloween and Blind Guardian as well, so heavy on the power and symphonic and less on the folk side of things with this release. There are numerous guest vocal appearances here (Chris Bay, Hansi Kürsch, Maxi Nil, Mark Boals) to add different characters into the concept of the songs here which is both interesting and different. Vexillum are talented musicians and have a knack for writing tasteful power metal with a dash of folk thrown in for good measure.
I don’t know if there are any stand out tracks or performances for me here… it is a decent release, although I would prefer a lot more diversity in the tracks here. The songs start to blend together with no major changes so individuality is hard to find. Albums from the past year with central themes like “Kaptein Kaos” and “Med Vættum” (both in my personal top 10 for 2014) have tracks that are strong and identifiable upon a listen or two in which you can pick your favs.
Ultimately, this album really reads like a musical production or movie soundtrack and less like a straightforward metal album. You will have to decide for yourself if you are sold on the concept or not. This is a decent album worth giving a listen to. If you are into the power metal genre, as well as a little bit of folk, then give “Unum” a shot and hopefully you will find what you are looking for.