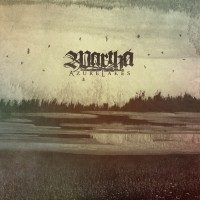 After releasing a quality full length in 2013 (“Paŭstań”), a major ripple occurred in the Wartha camp as some members left for whatever reasons. To re-establish themselves, they have released 3 singles since then (“Źmiej Voziera”, “Kurjan Vuitti” and “Heritage”) which were all drastically different from “Paŭstań”, and quite honestly, different from each other. I would suppose Wartha were trying to find the sound that best befits their current lineup and to showcase their path towards a “new” sound, which now culminates in the new full length “Azure Lakes”.
As many twists and turns as there have been recently on their path, I think they have found their ultimate destination with “Azure Lakes”. The folky, more upbeat overtures of old have turned into more introspective and meaningful tracks. With songs in their native Belarusian as well as English, Wartha have created a very bleak landscape to now call home. I am a fan of all of the versions of the Wartha sound but this one to me is where they should stay and continue with. There is more of a dark folk vibe going on here and I actually am reminded of “Draconian Times”-era Paradise Lost as well as Agalloch, Candlemass, Borknagar, Canada’s Thrawsunblat and Primordial….nothing wrong with any of those comparisons. From the beginning of intro instrumental “Buslovy Stohn” into “Starpath”, the Wartha you heard before will be a shadow of the past and replaced by a dirge and doomy entity. There may have been an element of this before but it was not in the forefront as it is now, especially with a number of folk instruments taking the back seat to smooth distorted and acoustic guitar. Just listen to “Sto j pa moru” and you will be transported into desolation… female vocals wailing a forlorn melody as much entrancing as it is crushing… completely mesmerizing. As you proceed onward into tracks “Aziorau blakitnych”, “Dajcie im pamierci” and the previously released single “Heritage”, you will be thousands of miles away from where you began, to where I couldn’t tell you but a dark place for sure. Longer songs are always a sign of maturation and that is the case here. 7 Songs at least 5+ minutes.
There are a number of albums that are coming out this year that people are looking forward to. I almost wanted to not write this review to hide this treasure for myself and let you listen to all of the other stuff instead. Alas, I cannot be selfish and need to let you know that this album could easily be one of my favourites of the year only 2 weeks into 2015… an amazing album. You can thank me later for letting you in on the secret…