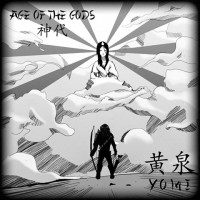 We do not have a lot of information to go on about Yomi other than that they formed in 2013, broke up and reformed in 2014 with 2 original members (Artiom on vox and folk instruments and Nikita on guitar) and 2 new members (Stephania on drums and Tom on Bass). They classify themselves as “Japanese folk-metal”.
I am not sure if that is the most accurate description as I would probably put maybe “doom” or “grindcore” somewhere in there too. Strip away any sort of folk instrumentation away and you will hear what I mean for sure, sounding a lot like old Celtic Frost/Hellhammer, Entombed, “Dark Medieval Times”-era Satyricon or early Carnivore but not as up-tempo, with more mid-paced tracks. Not being familiar with what particular folk instruments are being used here makes the reviewing a little more difficult, but the assumption is that they are Japanese in origin.
Subject matter for lyrics/song titles also appears to be Japanese History and Folklore as well sung in English. Upon initial listening, you will hear that this is obviously a demo with a decidedly low-fi recording and a mix that while highlighting the folk instruments, also makes it not an easy listen since it become very monotonous. Mix aside, the song tempos never change much and the song structures in general do not seem to ever do anything different or unique. Vocals are straight out of doom metal so I feel they are resisting that tag as obvious as it appears to me. If I didn’t know any better, it seems that the guitar, bass and drums were not written with the folk instruments in mind or after the fact and just act as a backdrop and not integrated into the songs. There is just a very disconnected feel to this release.
The combination of these two styles (doomy and folky) seems to clash and not gel in this case. Since I know for a fact folk and doom can make for a crushing release (The Flight Of Sleipnir and Mael Mordha for example)
I have to go back to Yomi and ask them to really do some self-analysis about what they want their musical voice to be and their direction going forward. My advice would be to work on new material that has more diversity in terms of tempo, song style and overall feel if they want to really push folk metal as their genre that they want to be included in. Best of luck, Yomi!!