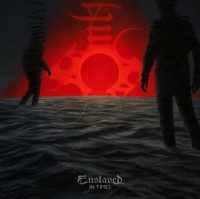 Enslaved is back, and how! After the marvelous RIITIIR, originating from 2012, it would be hard to match this work of art. However, Enslaved managed to do it.
The Norwegian band which started out as a pure black metal band came a long way from their start in 1991. Their style improved from ‘simple’ black metal to a more progressive, melodic sound, which could be heard clearly for the first time at the album ‘Axioma Ethica Odini’. Ever since then, they developed their sound, to what has become ‘In Times’, the 13th album of the band.
Like said, the sound developed to something that isn’t easily described. Progressive black metal is something that comes close, but doesn’t cover all aspects of the music. It can be harsh, soft and everything in between, with parts that are more black metal, to parts that sound more like 70’s psychedelic rock. Vocals vary widely, from the characteristic screams to beautiful clean vocals. ‘In Times’ balances everything in a perfect way, and their songs never cease to amaze you. Every time you listen to it, there’s something new that could be discovered. Are there no remarks to be made? No, there isn’t. This album is so close to perfect that it could deserve a full 10 out of 10. However, since the band improved on the close-to-perfect RIITIIR as well, I still hope there’s a chance the next record would even better, although this would be really hard to achieve.
This album is a logical progression from their previous album. Enslaved innovates, though in a subtle way without losing sight of their own, unique style. The only thing I could say is that you really need to experience this album. So make sure you’re home alone, close the curtains, put on this record and enjoy.