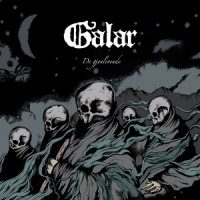 Aren’t there albums you have heard in your lifetime that as soon as it started, you knew it was going to be awesome? I am sure this has happened at least a few times for everyone and that is exactly what happened when I started listening to the latest Galar album “De Gjenlevende” (“The Survivors”) While I certainly have been getting my fill of troll/swamp metal lately, I have been waiting for a dark folk/black metal album to come along and this arrived just in time. Reminding me of a less orchestral Borknagar/Vintersorg, Yggdrasil, Glittertind or Windir, Galar have put together about 50 minutes of the grimmest folk metal you will hear this year…bleak, frozen and desolate. They definitely lean more towards melodic death I suppose in the vein of someone like Amiensus or Gallowbraid as well. Whatever Galar is, it just resonates with me. The bouncing between vocal styles really adds to the mood, from choral to clean to utter blackness and everything in between. There are fewer songs here than 2010’s “Til Alle Heimsens Endar” (6 as opposed to 8) but the new album is longer so the songs are longer which fuels the fire even more for me. You are listening to the maturation process taking place in every track here. The layering of instrumentation is key to the Galar sound with guitar floating above the bass and drums while vocals reverberate into your soul in tracks like “Bøkens Hymne”. Once you’ve heard the first couple of tracks, you will be thrown for a turn hearing “Ljôs”, an instrumental featuring piano, strings and bassoon (!), beautifully crafted and haunting which was a nice reprieve before getting lost again by “Gjeternes Tunge Steg”.
Production has also improved greatly since the last album…a little smoother all around but with still the edge music of this style requires. While I am a Galar fan and think that “Til Alle…” was a great album, it pales in comparison to this one, which is a good thing. Who wants to hear a band doing the same “safe” thing over and over? Galar have progressed but have not become “progressive”, writing songs still to their core sound but embellishing them with a stronger sense of their own being.
This is yet another possible top 10 album for me for this year… superb album.